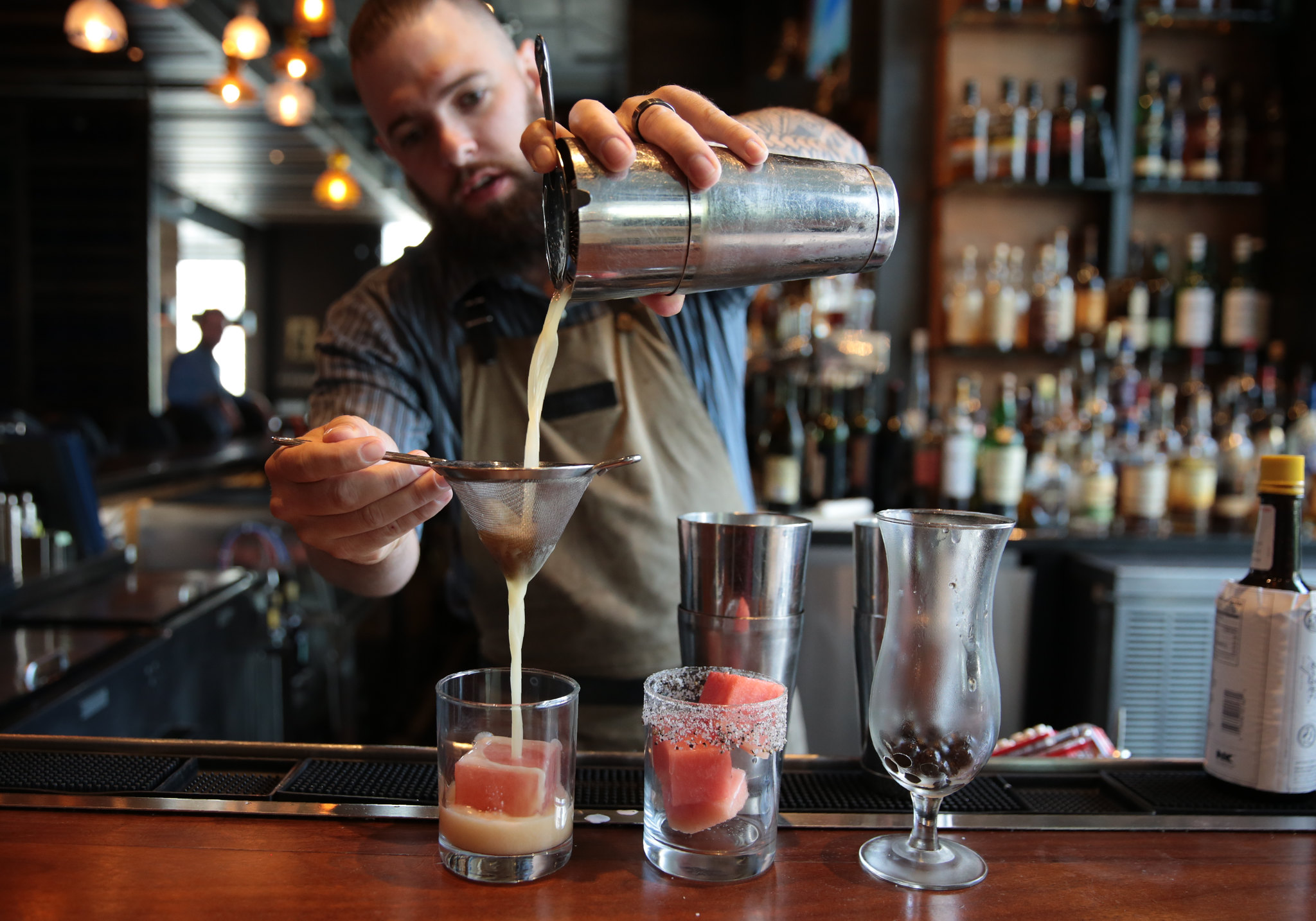 Recently, we were invited to sit down with the new face behind the bar at Blue Hound Kitchen & Cocktails in Downtown Phoenix, and he’s just released an extensive new menu with 11 original, impressive cocktails!

Phil Clark might be a recent new comer to Phoenix, but he’s veteran of the craft cocktail scene, most recently hailing from Washington, D.C., where he led the bar programs at Brabo by Robert Wiedmaier, and the James Beard-nominated Mockingbird Hill. We talked with Phil regarding his research-driven methodology in bartending, and how he focuses on putting pen-to-paper in order to map out the flavors and structures of a cocktail before mixing it up and trying it out. This way, he is able to identify where he can challenge traditional recipes and compositions by substituting his own, unique ingredient choices. Phil is all about shifting a cocktail to make it more precise and at the same time original, in order to give people something they think they know, but with a bit of a new surprise.

While we sipped on hand crafted cocktails and snacked on bar food we asked Phil to share some of his secrets for the at home mixologist and what tools we needed to create somewhat decent drinks at home.  Here’s the list of what he suggested…

We promptly ordered a tea strainer after the interview and are happy to report we’ve now got all the tools for our at home cocktail parties, thanks to Phil’s suggestions.  As for the drinks he shook up for us, we couldn’t agree on a favorite, read below to find out why; 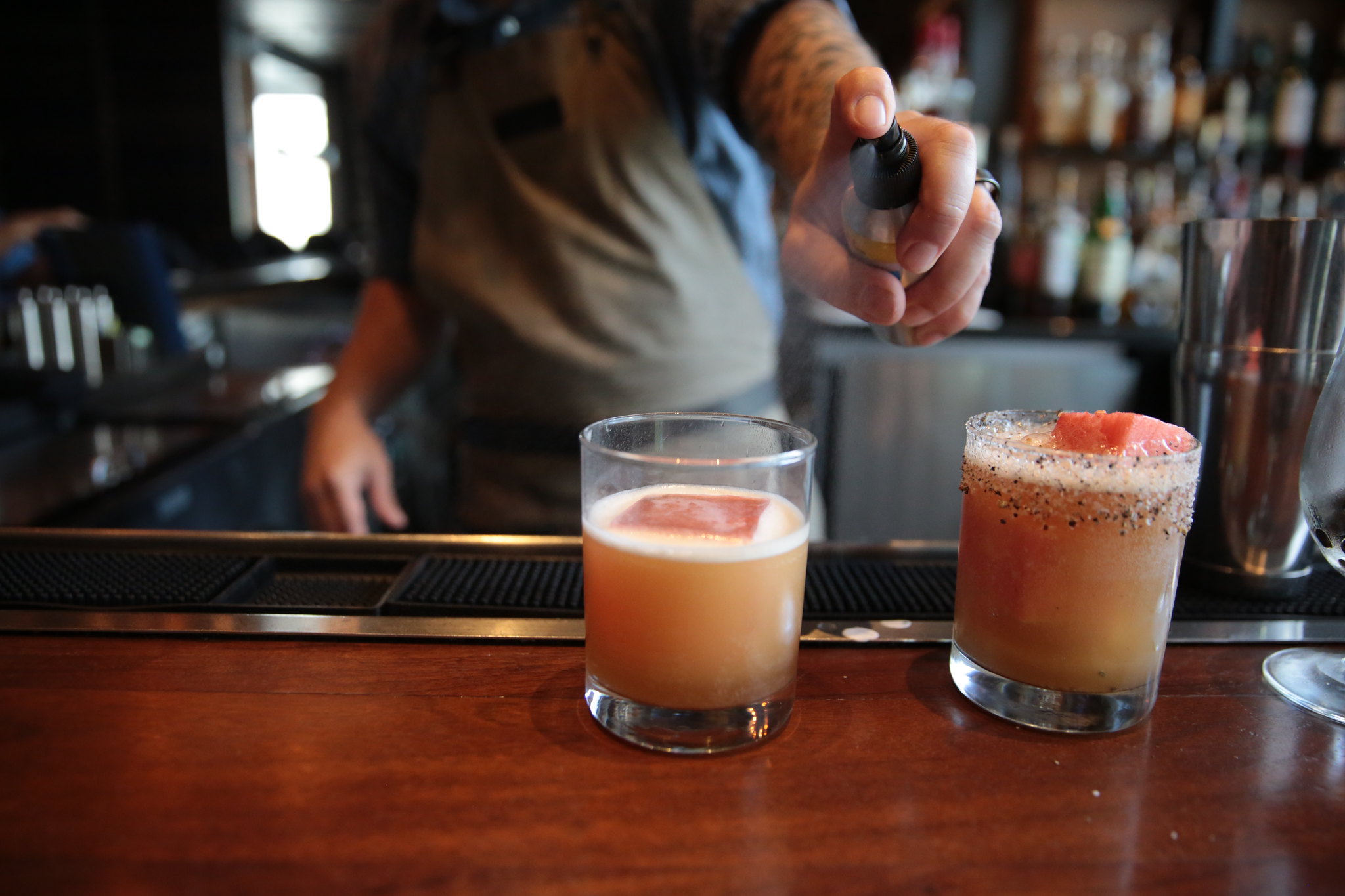 The Black Pepper Pink Melon (right) is probably Emily’s favorite drink of all time. Yes, at first it sounds confusing and maybe even a little off putting, but just trust me on this one. There are so many enjoyable aspects to this cocktail. From the first sip you get a sweet taste of watermelon with a little peppery kick, all the while getting hit with a refreshing smell of the rosemary garnish. It’s light and fresh but has amazing depth. Oh and the ice cube in the drink, is in fact a giant frozen piece of watermelon. 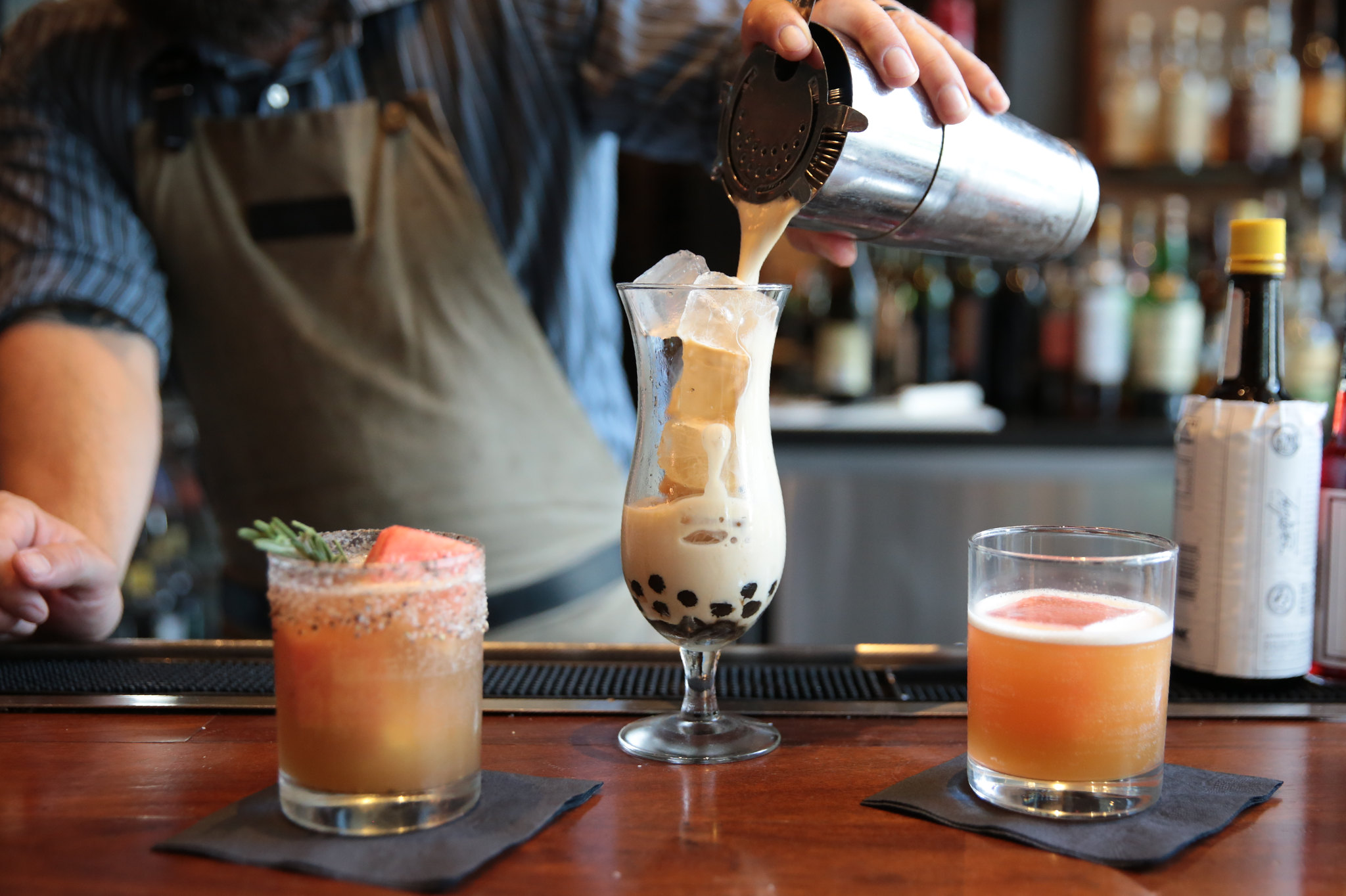 from left to right;

Junglebird – Grey Goose Vodka, Plantation Pineapple Rum, Cointreau, lime, brown sugar syrup, and Campari-infused ice.  (note the trending Campari ice cube, we expect this to take over the cocktail scene since it’s such a fun way for drinks to evolve while you sip on them!)

We’re not even a little bit surprised that after just a few weeks on the menu, Phil’s “Junglebird” has taken over as the most-ordered cocktail, knocking the four-year reigning Lawless from the top spot. 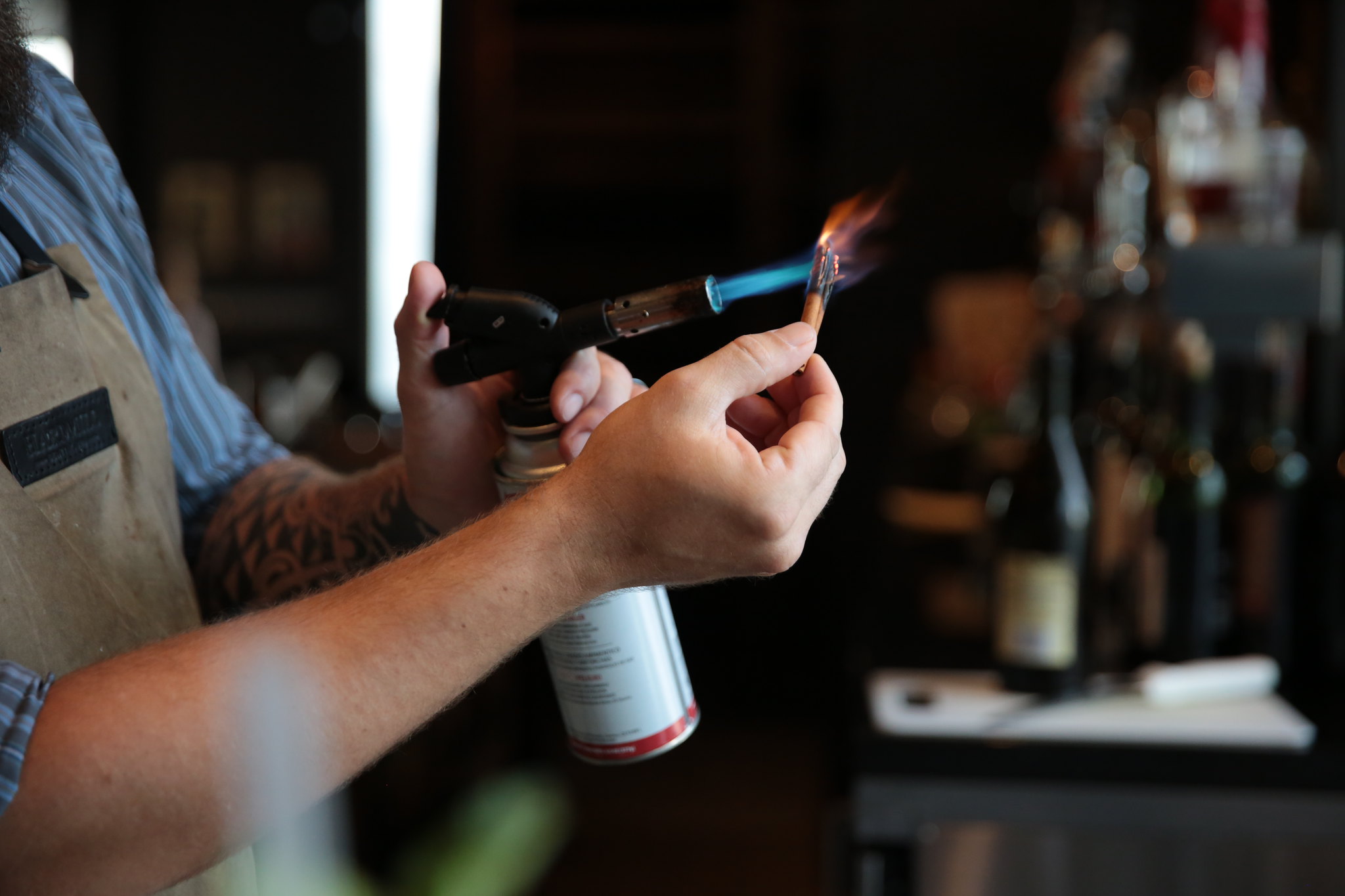 Boba Tea is topped with freshly toasted cinnamon stick and a sprig of mint. 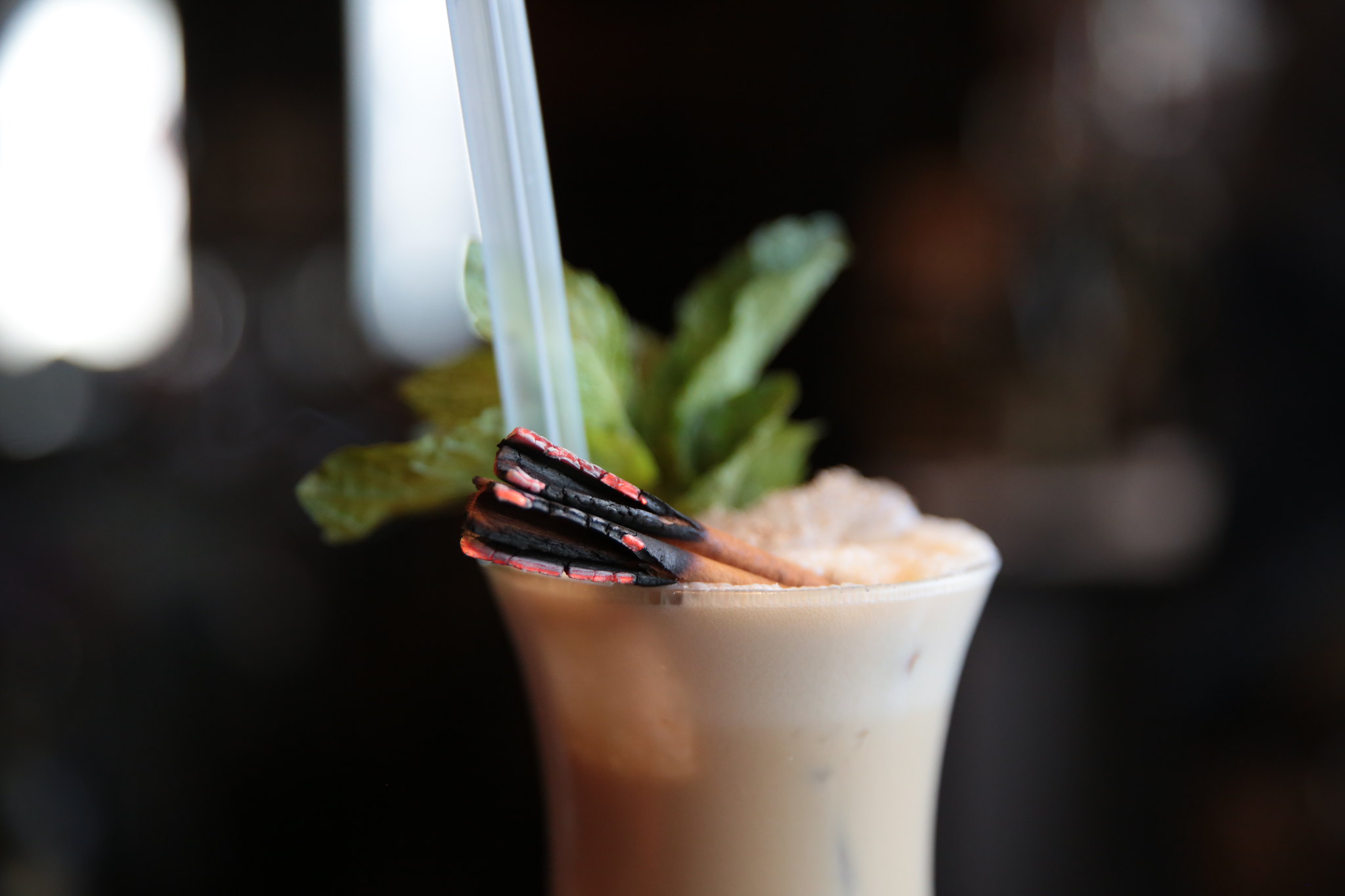 The Boba Tea is one of those dangerous drinks. You think you’re just sipping on a boba chai tea but really you’ve got a glass full of black tea vodka and chai infused vermouth. A sweet drink that would pair great with dessert.  The toasted cinnamon garnish seals the deal with the lingering fresh roasted sweetness and aromatic warmth it brings to the drink. This one definitly get’s Jenn’s vote for favorite. 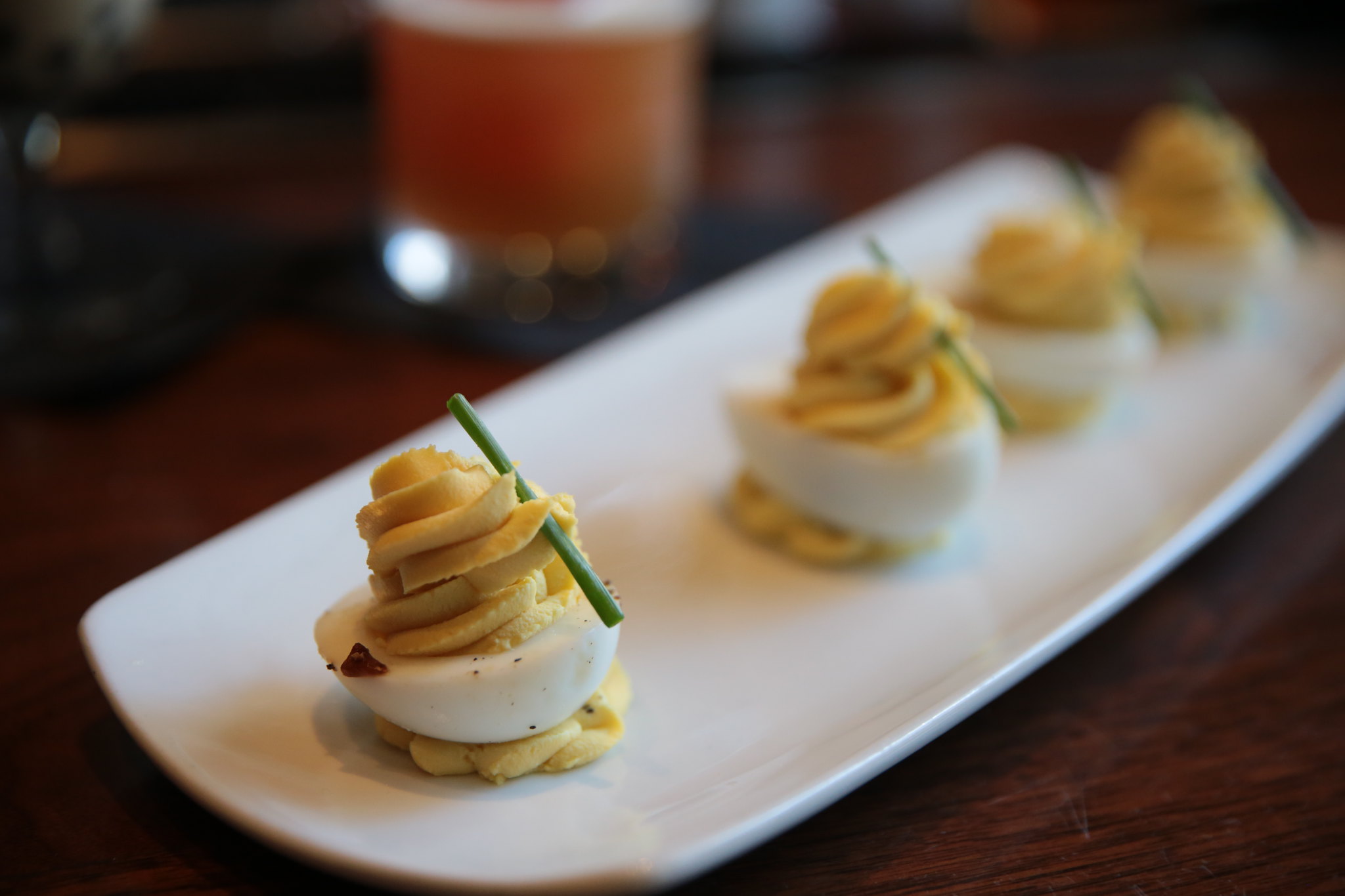 Deviled Eggs; a classic bar snack with hidden bites of bacon tucked inside of them! 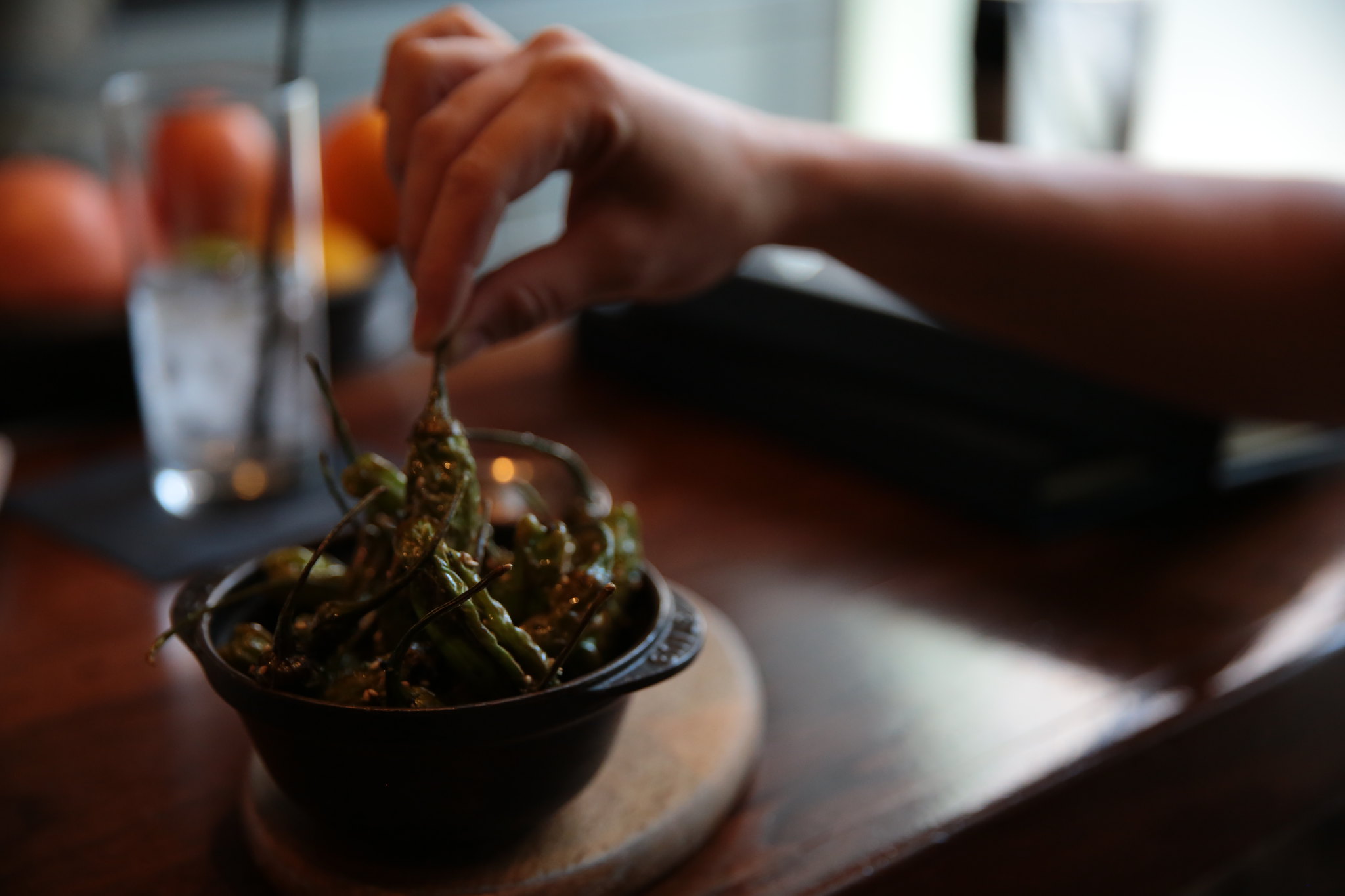 The Shishito Peppers with Siracha Aioli were a nice mildly roasted peppers with a spicy sauce and paired well with the Black Pepper Pink Melon. 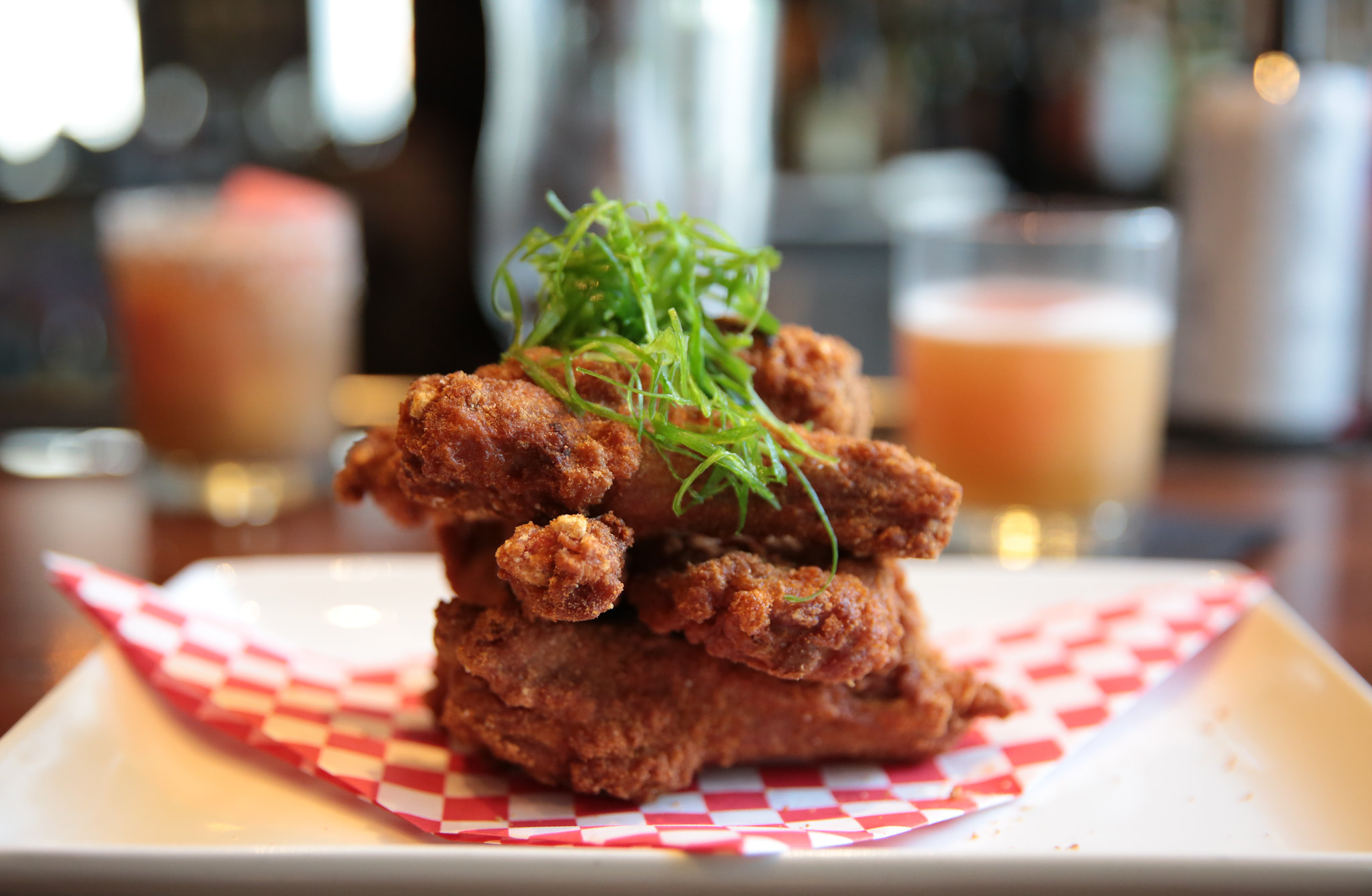 Thanks for taking time to chat with us, Phil!  And thanks to Blue Hound for hosting. We can’t wait to go back and try the Grasshopper made with Hendrick’s Gin, crème de menthe, crème de cacao, cream and soda. This is a traditional Grasshopper reimagined. Made with gin, this version has a nice botanical undercut and makes for a light summer sipper without being overly sweet.