When The Bitches heard there was a new spirit in {down}town, we knew we had to be one of the first to try it. Thanks to a spectacular barrel release party put on by J Lauren PR, we got to sample specialty Knob Creek whiskey cocktails, paired with new summer menu items from Blue Hound Kitchen & Cocktails. Bourbon Bitch Meghan had this to say:

“One of our favorite, dog-friendly staycation spots, the Kimpton Palomar Hotel, is also the home of Blue Hound Kitchen & Cocktails. Along with its locally-trained executive chef, Sean Currid, the Blue Hound can now also boast about its very own, limited-batch Knob Creek whiskey, aptly-dubbed ‘Blue Hound Hooch’. 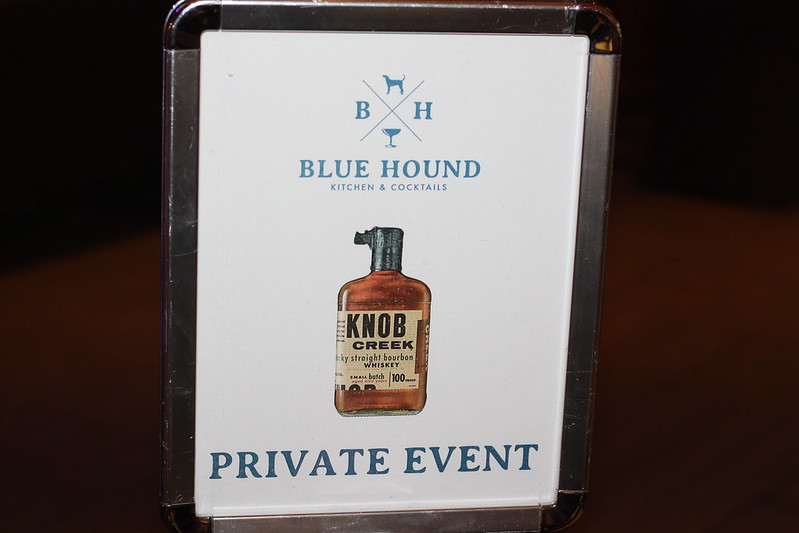 Blue Hound Hooch is a 120-proof, golden bourbon that was distilled in Kentucky (yeah, yeah – it’s not from AZ, but we won’t hold it against them) and aged to a minimal – yet respectable – nine years in a white oak barrel before its distribution.  Thanks to its slight smokiness and the not-too-strong caramel and vanilla notes, this hooch definitely made it to our list of sippables.  Before you think it may be too good to mix up into a favorite or new-to-you bebida, though, think again:  The Blue Hound’s new (and handsome) head bartender, Phil Clark, and their chef de cuisine, Logan Stephenson, paired up to create bourbon-based drinks to complement their summer menu and they set our tails wagging. 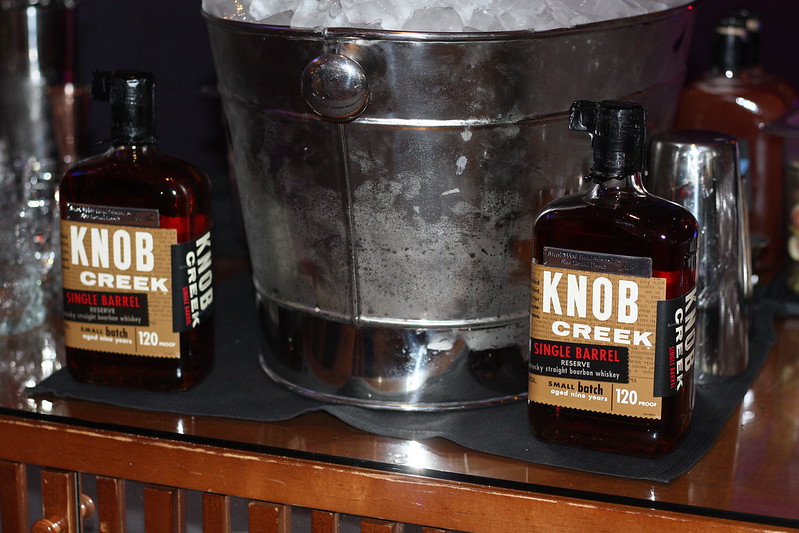 1. The Tart & Tanic with dried spiced duck wings:
The Blue Hound started the night strong with this pairing and it was definitely our favorite.  The Tart & Tanic mixed chamomile-infused Hooch with clarified orange juice, cinnamon and hibiscus-infused ice and it was ah-mazing.  Knowing too well how cinnamon can easily become overpowering, we were impressed with the mastery with which it was used; indeed, every flavor was well-balanced and delightful. 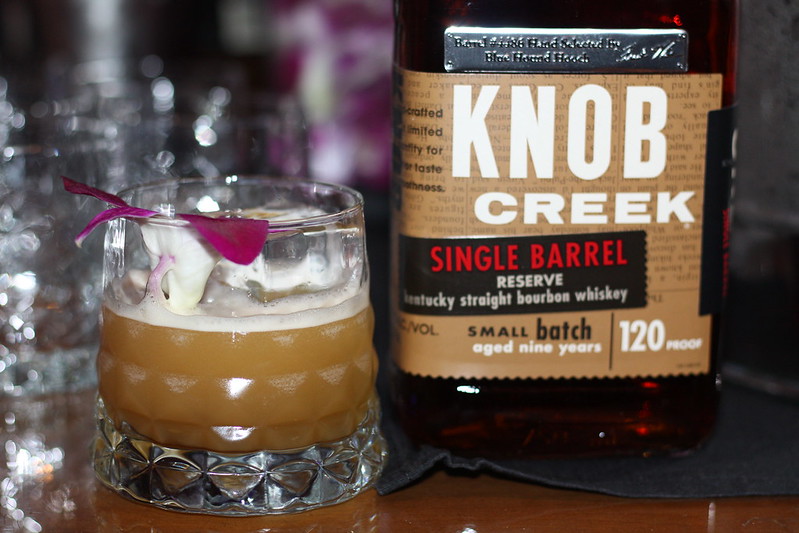 Not to be completely outdone by its drink counterpart, the accompanying duck wing (a.k.a. confit de canard, for those of you who like your French terms) was perfectly crispy and moist.  If you’re not a fan of traditional, pub-style wings, rest assured that these aren’t the fiery-spicy, messy wings of your partying days:  They’re sauceless, refined and delicious duck legs, but, like those everyday buffalo wings, you won’t want to stop with just one. 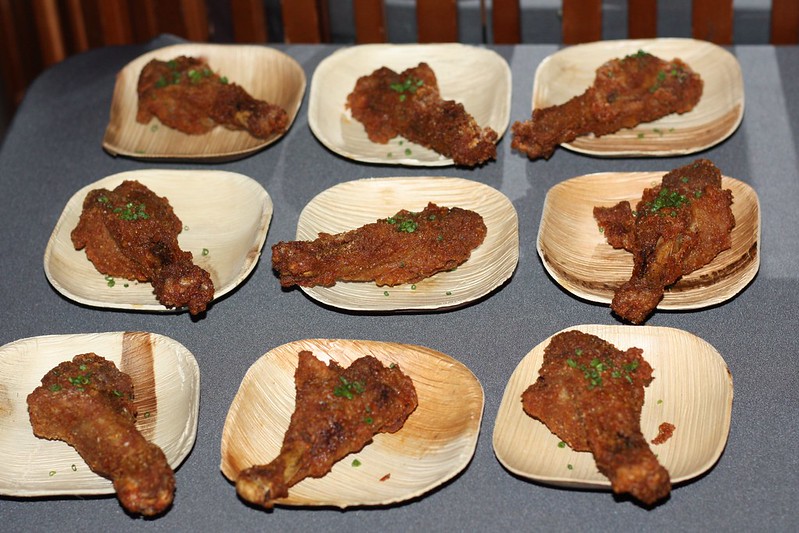 2. The Salt & Spice featured cardamom-infused bourbon, salted thyme syrup, lemon oleo-saccharum and lemon juice, garnished with a skewered fig.  Maybe a little too heavy on the oleo-saccharum, this one reminded us of an algonquin (which is making a comeback, by the way) and we found ourselves wanting a salted rim to tame the saccharine.  When followed by the zest of the molasses-swathed veal and a nibble of the accompanying salty, petit four-sized biscuit, though, we were more appreciative of all that this combination had to offer. 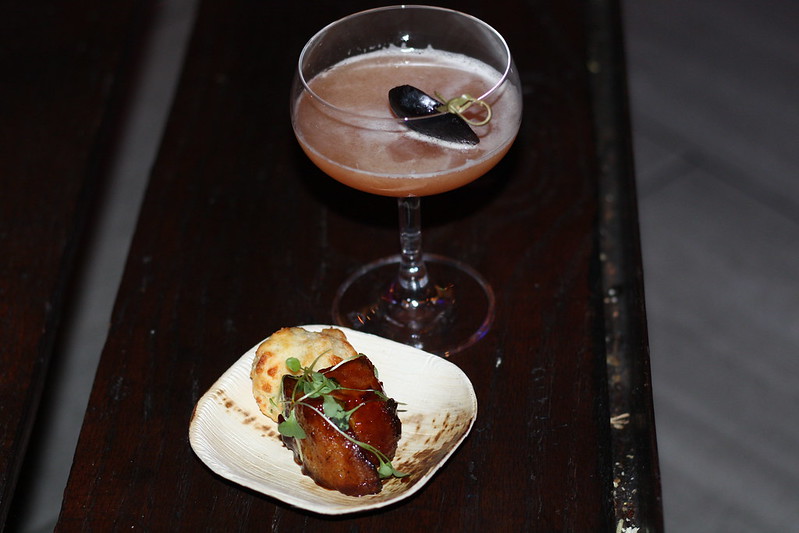 3. The Savory & Smokey with pork belly and house chow-chow:
First of all, the Savory & Smokey had porkfat-washed bourbon in it.  ‘What’s that?!’, you ask?  Well, we did, too:  Basically, it’s made by draining a little bit o’ the bourbon from its bottle, filling it with freshly-rendered pork fat, freezing the bottle overnight and then, voila!, you have bacon-esque bourbon in the morning. 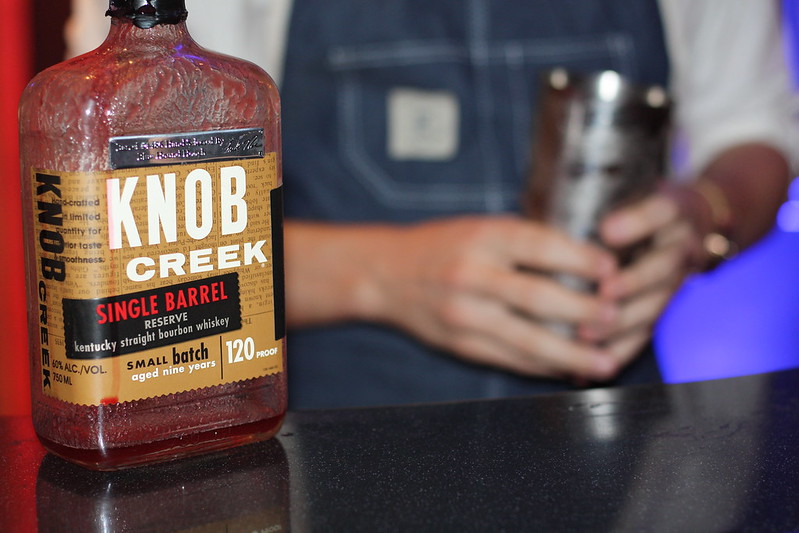 And what could they possibly make with that?  Well, when you add sherry, desert blossom honey and strain it through some mesquite-smoked blackberry compote, you end up with a Savory & Smokey, which, we’d say, gives a bloody mary a run for its money when it comes to what we may want at our next brunch. The well-chosen fresno chili that topped the pork belly really brightened all of the smokey-savoriness of this pairing, but we were a little less-than-thrilled by the vinegar-forward chutney (or was it a relish?) that the pork was served atop. 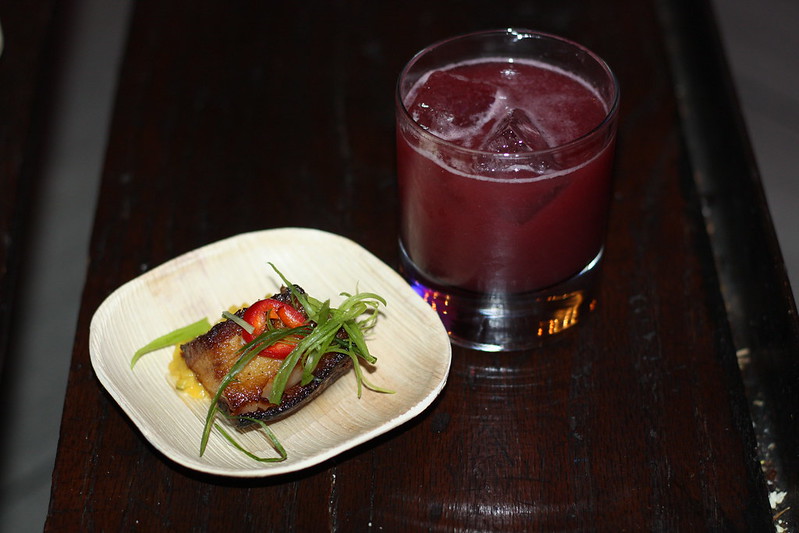 4. The Sweet & Succulent with a graham cracker caramel bar:
Like a final course should be, this last pairing was downright decadent.  Vanilla-infused Blue Hound Hooch made its appearance in the Sweet & Succulent, along with chocolate mole, dates, chipotle, cocoa and coffee, onto which marshmallow fluff was piped and then charred with a torch.  (Think ‘spicy, adult hot chocolate that meets s’mores’ and you’re close – it’s even better than that.) 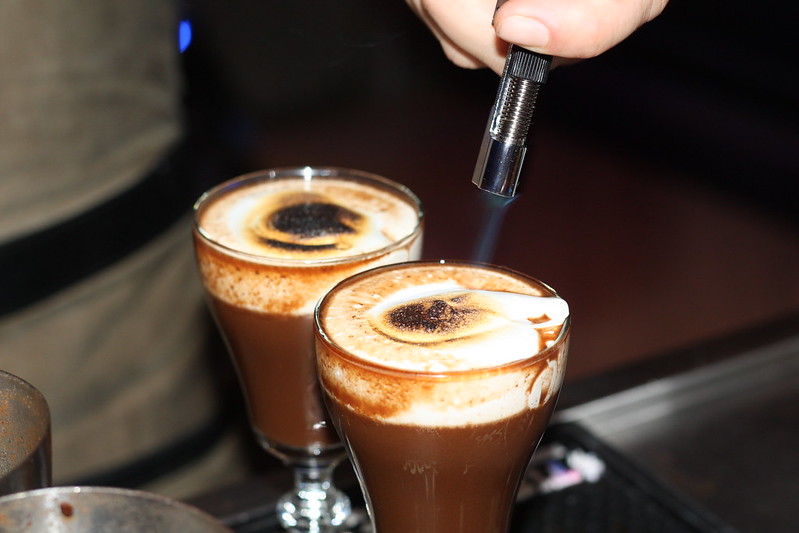 The fluff settled on top of the chocolatey goodness and didn’t disperse into the mix, which made it oh-so fun to sip because you could take sneaky little swipes of the fluff with the tip of your tongue while you were drinking, without looking you were lapping it up.  The graham cracker cookies sandwiched a silky, overly-generous layer of caramel that positively exploded when bitten into, which was good, as no punches were pulled with the mole’s seasoning and the caramel and fluff offered a nice reprieve from the heat. 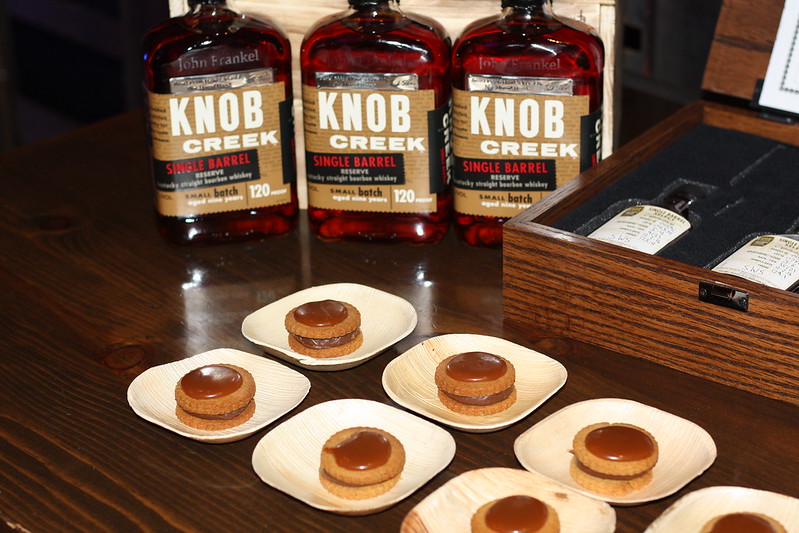 All in all, Blue Hound Hooch will be a fine addition to the Blue Hound’s repertoire and they really showcased its versatility, as well as their staff’s creativity and excellent execution.  We’re looking forward to their summer menu, which will start being offered this July, and we’ll absolutely be back for the confit duck.”