When we were invited to Sushi Roku’s ‘Summer of Sushi’ dinner to try out their new dishes we were like, yeah obviously.

If you know anything about The Bitches (trademark pending), you know that we’re up for pretty much anything. We love vegetarians, but we tried it and it’s hard. We’re back to eating everything again.

You’ve probably heard of Sushi Roku before, or you should have. It’s tucked inside The W hotel, but it isn’t like one of those weird hotel restaurants that leave your wallet empty and your stomachs, too. The food here is omakase style and with each dish the chef delivers you will giggle in delight and make stupid chair dancing moves like we did when we ate here. 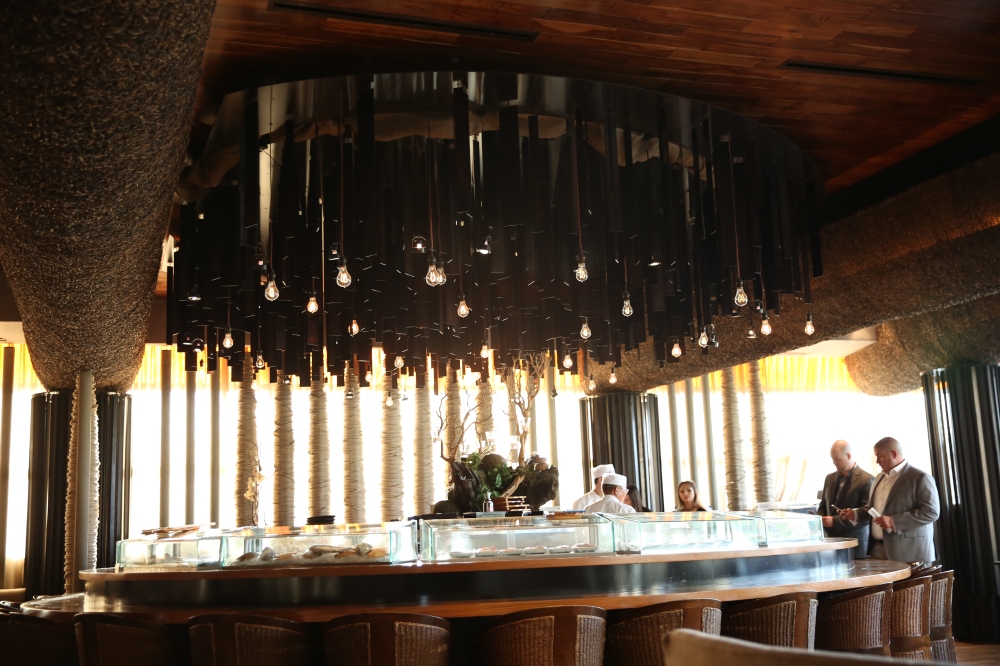 The dinner had three different courses, totaling roughly ten plates each paired with a beautiful cocktail, and a dessert course.

And Sushi Roku welcomed us with open arms and prosecco, so we were off to a good start.

We started with brussel sprout chips. Sometimes brussel sprouts can be pungent. Once, at a dinner party, a guest who didn’t eat vegetables pushed around a plate of brussel sprouts and told the host very loudly that his entire house smelled ‘like foot.’ It didn’t, but I guess if you’re only used to carbs, a roasted brussel sprout can make you feel like a kid again (aka, unwilling to eat green stuff).

These did not smell or taste like foot. They were crispy and savory, not bitter at all, and drizzled in a truffle oil that left us wanting all the brussel sprout chips. All of them. All the time. Forever. (you can see them hiding behind our prosecco, they were so good, we’re not sure anyone got a photo, if you know what we mean). 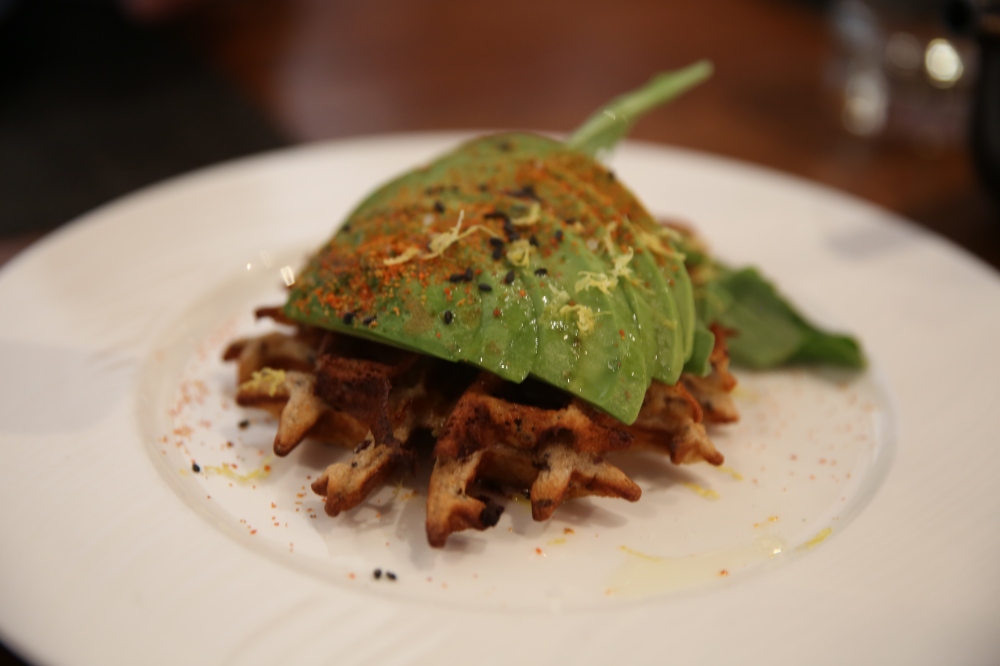 Sushi Chef Miles Newcomer and Executive Chef Joey Castillo run Sushi Roku. Together they combine the best of Asian cuisine and American cuisine into the kind of fusion we can get behind. Like the champagne brunch dish we ate next: a Hayden Mills avocado waffle. It was crisp but soft and fluffy in the center. The creamy avocado offset the waffle’s texture and we realized, why didn’t we ever think of pairing waffles with avocado before?

We moved on to the Sea Bream Whitefish Sashimi (herb vinaigrette, ume furikake), seared salmon sashimi (togarashi crust, avocado, cilantro jalapeno salad) and Toro Sashimi (oscietra caviar, yuzu, salt). The toro tasted like being next to the ocean in the best way possible. It reminded us we needed a vacation. It reminded the guy next to us at dinner that he loved caviar. 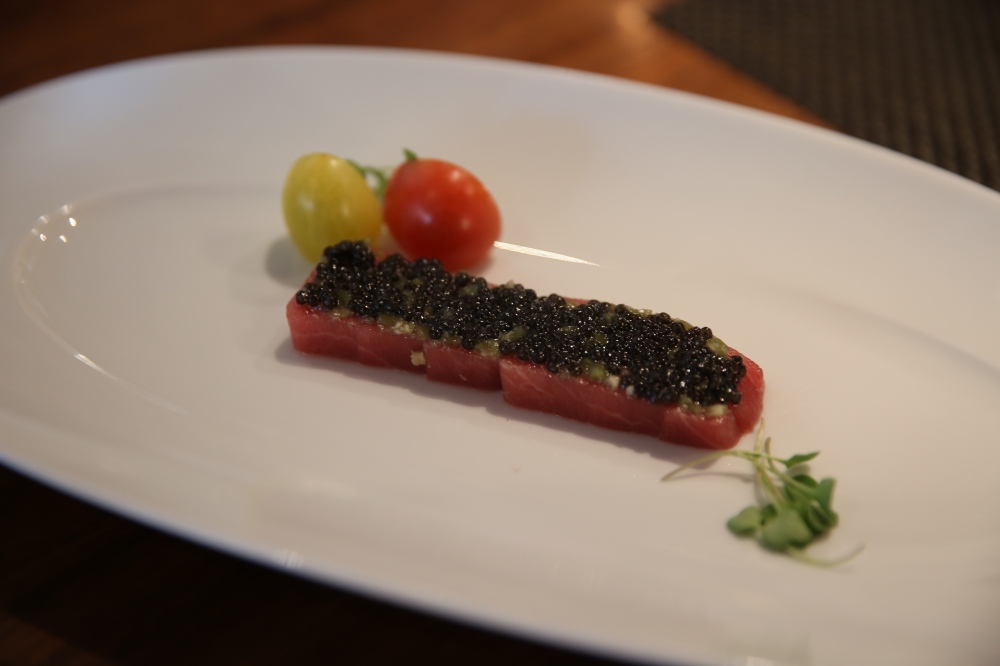 The sea bream was beautiful. The herb vinaigrette looked like little green eyes. Don’t let that scare you. Just eat it. It will absolutely delight you, okay?

We were getting full by now, but when in Rome. Or Japan. Or Sushi Roku, you must power through and try one of everything because everything is delicious. But first, drink your drink. It makes it easier.

Our next cocktail was called Down the Rabbit Hole ( a concoction of Bulldog Gin, St. Germain Liqueur, Agave, Muddled mint, Lemon, Carrot Juice, Honey Simple Syrup and Elderberry.) and frankly, you could argue it was a healthy juice cleanse of carrot juice and well, gin. But you can hardly taste the gin, which is what makes this drink so great/easy to down/why we had to call an Uber. Hop to it. Order this.

above// Seared Salmon and Avocado

The fried calamari isn’t chewy or mushy like you sometimes get. This was crisp and still warm and had a bit of a kick from the charred jalapeno glaze. We even ate the calamari with the little legs (and can we say, those are the best texture-wise so give it a try).

above// smoked port with a cork on top to release the smoke table side. 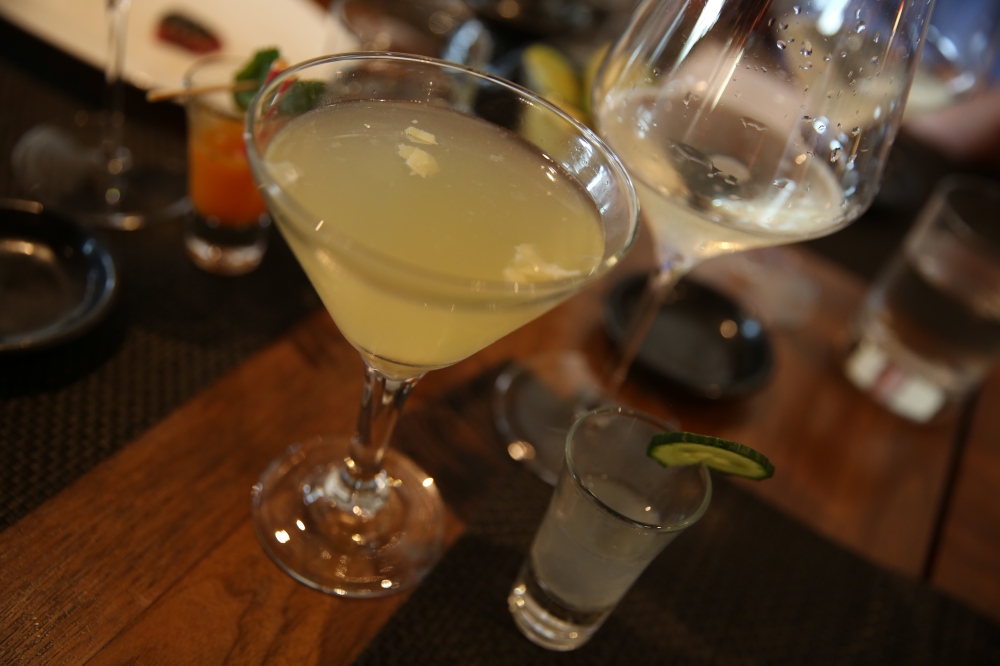 We were also given a pear martini which was made with real pear and garnished with Parmesan cheese. We thought it was delicious, but others at the table had a difficult time accepting cheese into their alcohol. Final verdict: Try it once. You’ll either love it or scoop out the cheese and have a perfectly fine pear martini.

The third course was the largest, but like tiny snakes that find prey three times their size, we unhinged our jaws and made a go of it.

You know, for you. Our dear readers.

A palate cleansing roasted cauliflower was brought out. The colorful cauliflower was roasted in a light marinade and accompanied by pinenuts and red dates. If you like Pita Jungle’s roasted cauliflower dish, give this a try. And pair it with the fried calamari like the chefs did. We like to believe that eating something good for you while eating something fried really cancels everything out and then it’s like no calories at all.

If you’re not into fish… what are you doing at a sushi restaurant? But also, don’t worry because Sushi Roku gets it. The restaurant gave us the most decadent little wagyu sliders we’ve ever eaten. Camembert cheese, crispy mushrooms and onions, and truffle mayo brought out the rich flavors of our burgers. We didn’t mean to but we totally ate them both. And writing this, we kind of want more.

Halfway through our delight, a cocktail came. It was a bourbon, lime, and mint drink dubbed The Black Mamba (above)

The last of the dinner course was a trio of nigiri; salmon, tuna, and yellowtail. They really saved the best for last. It may have been the simplest dish but it was the most delicious. Yellowtail is so buttery and perfect… why do we even eat any other fish? It also went very well with our South Side drink, a mix of cucumber, mint, and soju which was incredibly easy to finish. 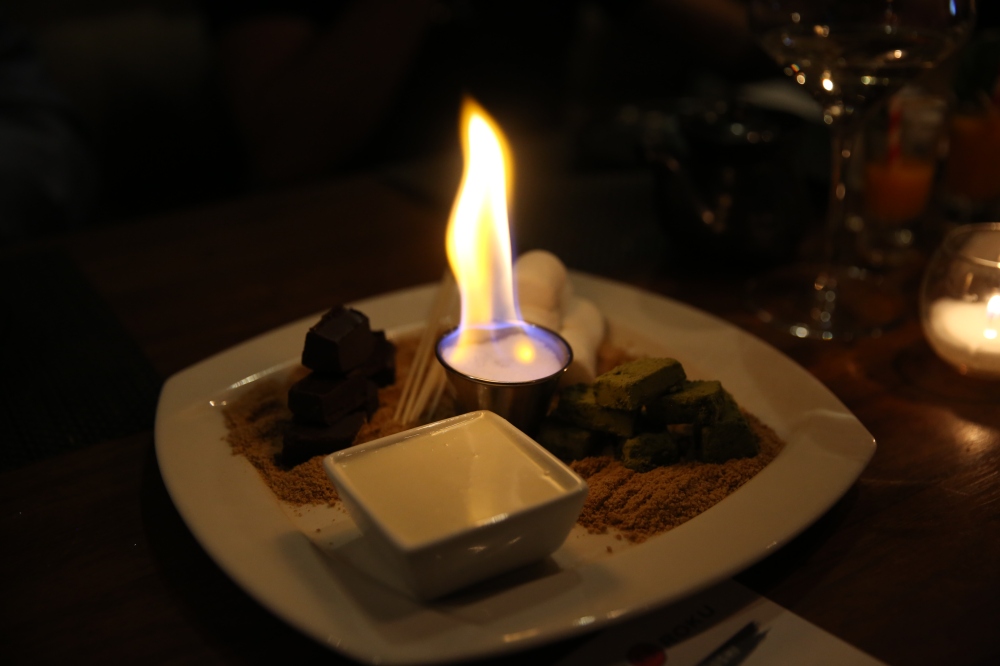 Dessert was a do-it-yourself s’mores bar with a slight Asian twist of matcha green tea covered chocolate. We were a little surprised the marshmallows weren’t homemade (where in that case, the marshmallows could have been green tea while the chocolate was left unadulterated) but overall it didn’t change how much we enjoyed the dish.

What we loved, however, was the espresso martini delivered to the table as a digestif of sorts. Kahlua, Bailey’s, and real espresso were all shaken together to create a drink so delicious it has consumed our thoughts for a week straight. Text messages have been sent about it. Entire IRL conversations have been had. It goes well at brunch or dessert or dinner. Have it whenever you can. And eat at Sushi Roku often.

Until next time, The Bitches.

Disclaimer //  Yes our meal was free (thank you Sushi Roku). No our opinions were not altered in anyway.  Bitches aren’t for sale.  We only share and partner with restaurants we think you should know about! Honest to blog.  Read our full disclaimer here.