When you want dinner and breakfast and can’t decide, or maybe you just like your chicken fried and served with syrup –  whatever the reason is that leads you to  Lo-Lo’s Chicken & Waffles, it’s cool.  We chose it because a few bitches had never been here before and, as popular restaurant here in Phoenix, we found that unacceptable.  So, down we went to South Phoenix for an authentic, soulful experience at Lo-Lo’s. 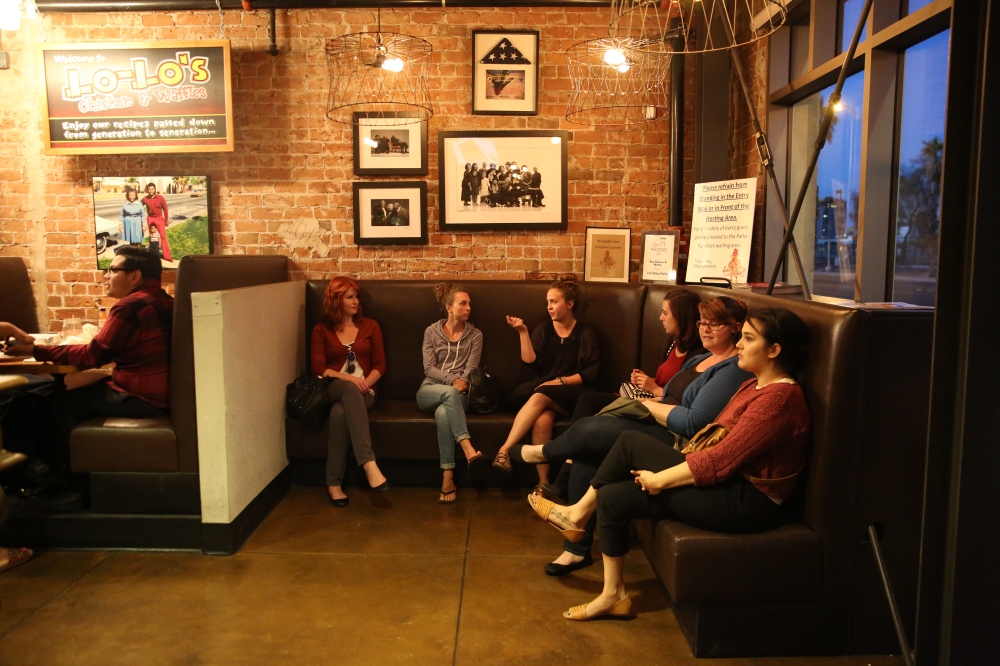 Be warned, this busy restaurant does not take reservations and your whole group needs to be present to be seated, so you’ll want to get there before you’re hungry!

While Lo-Lo’s isn’t new, it’s definitely a dining experience worth trying, especially since a few bitches had never been here before.

The Purplesaurus Rex was at the top of the list for Cameron, as she needed to get her purple-drank on:  “Everyone should have a purple drank at least once in their life, so I ordered the Purplesourus Rex. It tasted purple, it was like my childhood but with alcohol and pretty little blackberries floating on top.”

The ultra-sweet, non-alcoholic Kool-Aid is served in served in a large, wide-mouth ball jar, while cocktails are served in smaller jars.

Unfortunately, they were out of blue Kool-Aid; however, we did manage a full line-up with (from left to right) a Watermelon Mojito (cucumber watermelon vodka, muddled mint & lime juice, topped with Sierra Mist), Georgia on My Mind (peach vodka, sweet tea & orange juice), Blue Ivy (vodka, blue Kool-Aid, a splash of Sierra Mist & a twist of lemon) modified with red Kool-Aid and, of course, the Purplesaurus Rex (gin, grape Kool-Aid & lemonade). The drinks were much sweeter than our usual cocktails: “I was only able to handle about half of my drink, is it weird that I seriously considered cutting mine with vodka to make it go down smoother?”, adds Jennifer.

Also, we love this little paper bag wrapper for their beers. 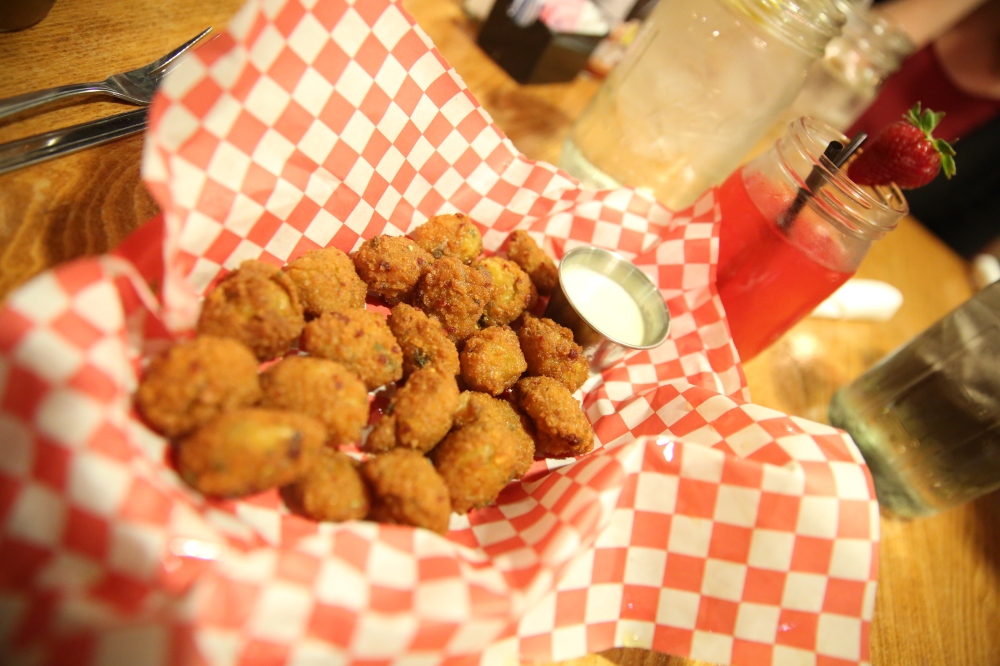 Sara ordered the the Corn Fritters and explains “[This was] My first experience at LoLo’s! To begin the meal I ordered red kook-aid [sic] with was delicious and contained copious amounts of sugar! I chose to delude [sic] it with a bit of water to adjust it more to my liking. As an appetizer, I ordered the Sweet Corn Fritters, the order was very generous – sizzling hot and delicious. Each crispy bite was packed full of sweet seasoned corn and a kick of spice! They were accompanied by honey mustard sauce which was light and creamy and which was utilized throughout my main course. I ordered Betty’s Boob, 1 perfectly fried chicken breast and a waffle. The chicken was juicy and flavorful, not a bit greasy while the waffle was large and soggy. Obviously not made to order, the waffles redeeming quality was the incredible cinnamon maple syrup that accompanied it. Overall a great meal, can’t wait to return! The atmosphere was great, call me old but I did think the music was too loud! Felt like we were yelling the whole meal!” 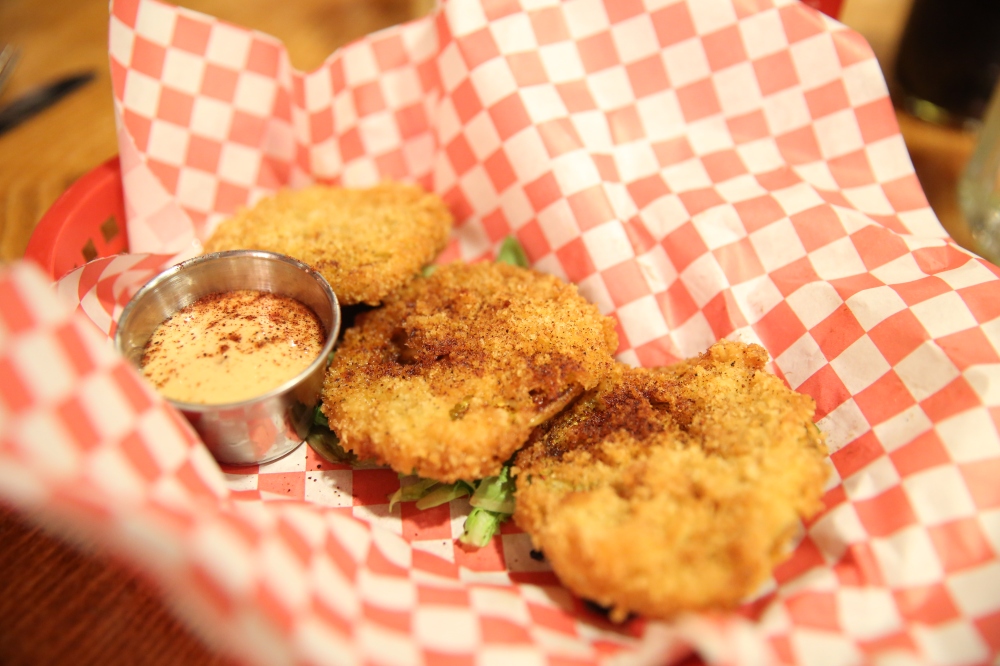 Fried Green Tomatoes were crunchy and served with a spicy aioli sauce which was good because the breadcrumbs could have used a bit more seasoning. Thankfully, the robust sauce helped flavor this appetizer.

Meghan ordered the chili, which came with cornbread, and ordered a waffle on the side… “Honestly? I KNOW I can make each of those things better on my own on any given day: The chili tasted like it came out of a can, was all one texture and the only visually-identifiable ingredient other than the cheese and onion topping was pinto beans; the cornbread was dry and over-baked; the waffle tasted like it may have been frozen prior to serving, as it had that this-seems-like-it’s-on-the-cusp-of-being-stale texture.”And she adds, “The silver-lining of my Lo-Lo’s experience (other than the Bitches and the cool surroundings): The cinnamony syrup was so good that I put it on everything! (Yes, even the chili!) Other points: The music was a little too loud, they were able to accommodate the group faster than I expected, they served my cornbread and waffle about 10 minutes after the chili, the non-watermelon mojito they made wasn’t disappointing.” 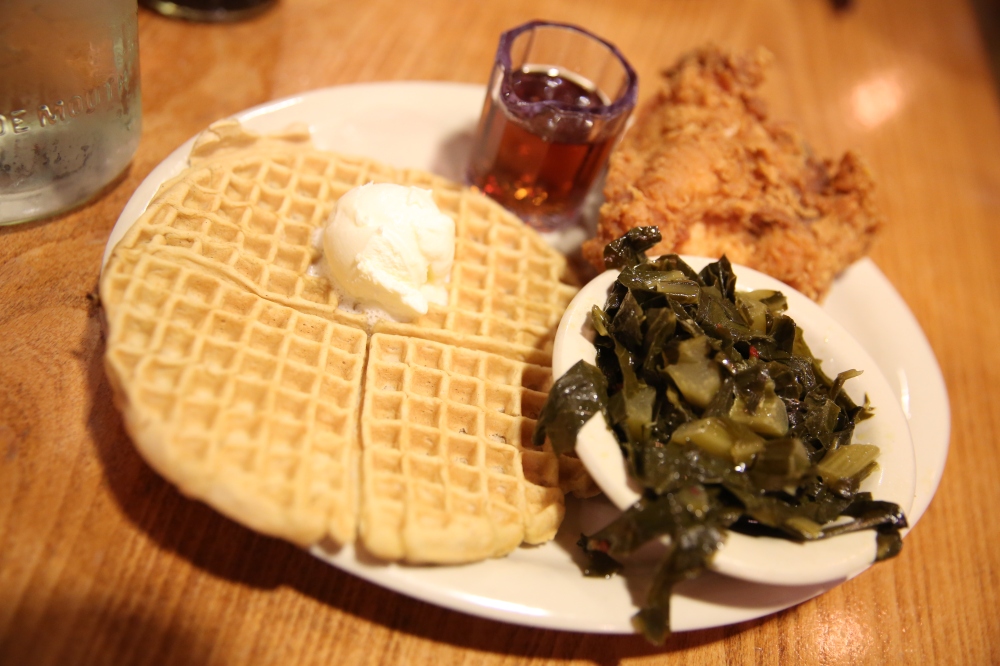 First time Lo-Lo’s-goer, Cameron, says, “I had Betty’s Boob. The chicken was super crispy and delicious and not greasy. But really the greens are what it’s all about. I don’t understand how a green vegetable can be creamy in texture. It was amazing and my favorite part. So good! ” 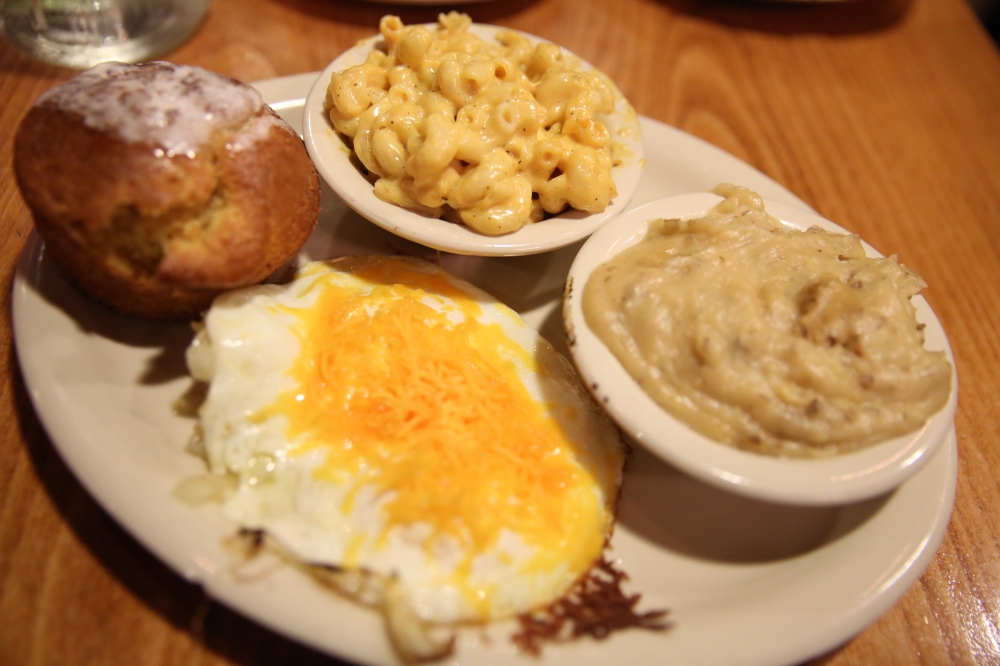 Jennifer shares, “As soon as I saw the mac and cheese and fried okra on the menu, I knew I wanted the veggie platter with a combination of  your choice of four sides and cornbread! (praise hands emoji). I loved adding a few bites of sweet corn with my mac and cheese which was well peppered by the way.  The texture of the fried okra was something I’ve been trying to master in my own kitchen, with a well cooked soft okra center and crispy breaded exterior I was impressed, I did miss a dipping sauce of some kind though, next time I think I’d ask for that aioli sauce (or is it bad to want some ranch)?  Must be a personal thing, but I’m a firm believer in dip-able fried foods, I’m all about the sauce.” 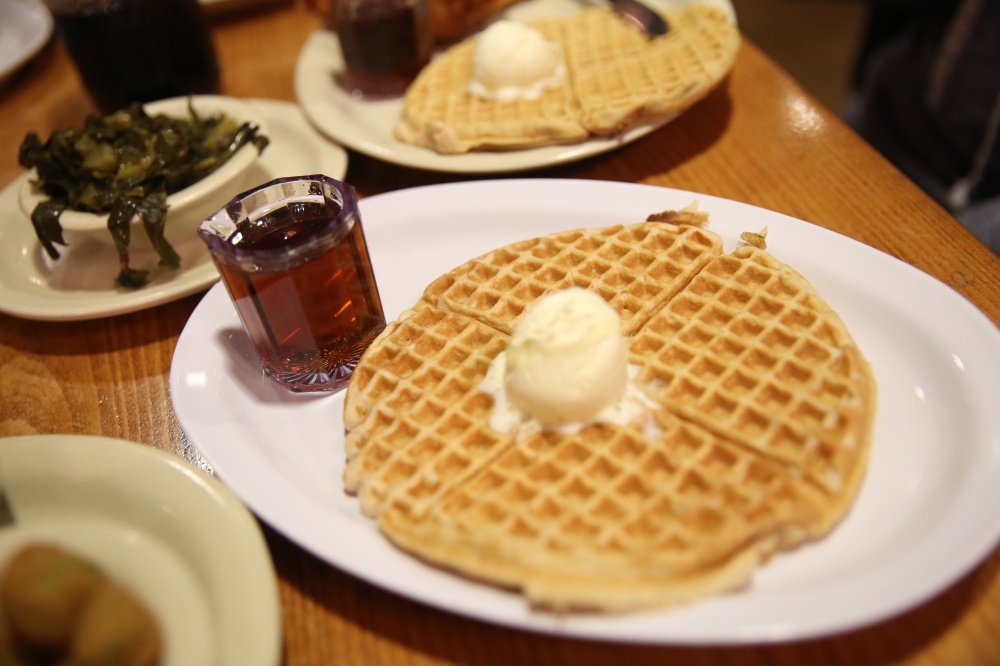 The Full Review {their menu here}:

Favorite Appetizer: The Corn Fritters were probably the best part of the meal.  They’re crunchy, fried, cornballs of delightful flavor and have dipping sauce to top them off. This was definitely the most flavorful basket of appetizer goodness.

Favorite Entree:  Number 8, Betty’s Boob – One juicy breast & one delicious waffle. With almost half the table ordering this combo as their meal, you know it’s the chicken-and-waffle experience everyone is looking for.  While the waffles could be a little less spongy (almost soggy) and just slightly crispier, the crispy chicken is a perfect complement.  And, all that butter covers the waffle evenly and, with a drizzle of maple syrup, it’s a filling meal.

1-10 Service {0 worst, 10 best}: 7. We got drinks, water and food relatively quickly. Our server was super-polite and accommodating for the drinks since they were out of the blue Kool-Aid and also made our drinks to taste for each of our requests, more or less sweet.  A few items didn’t show up as scheduled, but once all our food arrived we figured out what was missing and she promptly brought it out.

Mistakes {corrections?}: Not any mistakes, just a few items that didn’t come out of the kitchen right away, like Macey’s Fried Green Tomatoes, but, in the end, we got everything.

Reservations? They do NOT take reservations, not even for large parties

Parking: Small parking lot close to restaurant, but they have additional parking in a dirt lot across the street.

Would we eat there again? Probably, it’s one of the furthest points in downtown/south Phoenix, but it’s definitely worth the drive for some soul food.

Have you ever been to Lo-Lo’s Chicken and Waffles?  How was your experience there?  What was your favorite item on the menu?