Who doesn’t love a little Southern Comfort? Warm biscuits and cornbread used to sop up flavors of the south mounted with butter and Italian heritage…A little bourbon in maybe everything… BFC was all in to go south for the winter. So to Okra we went, a charming little restaurant brought to you by the same creative team that gave us Crudo, with their intense, flavorful drinks and small but delicious bites like the bone marrow they’re known to serve up along with crustinis and a side of courage.

Okra has bone marrow, too, but it’s served horizontal, not vertical with the world’s tallest marrow scoop. And can we say it goes really well with the head cheese? Anna ordered these two starters as a meal, but we all partook in the pairing- the roasted bone marrow came with an oxtail and pepper jam that had a tang that brought out the umami of the marrow. Slathered on a warm biscuit, anyone would be lucky to eat that. The head cheese was rich and satisfying, accompanied by a plate of vinegared frisee, which lightened the dish and brought out its fried goodness. Head cheese, which is essentially exactly what it sounds like (think aspic and think delicious meaty goodness. If you like the flavor of pâté, chances are you like head cheese.) might scare some, but don’t be intimidated by the name or the ingredients. It’s bolder than a piece of fried chicken and if you’re with the right kind of date, will impress the hell out of him (or her!) that you knew what head cheese was without googling it.

The mint julep was a perfect balance of sweetness & bourbon. 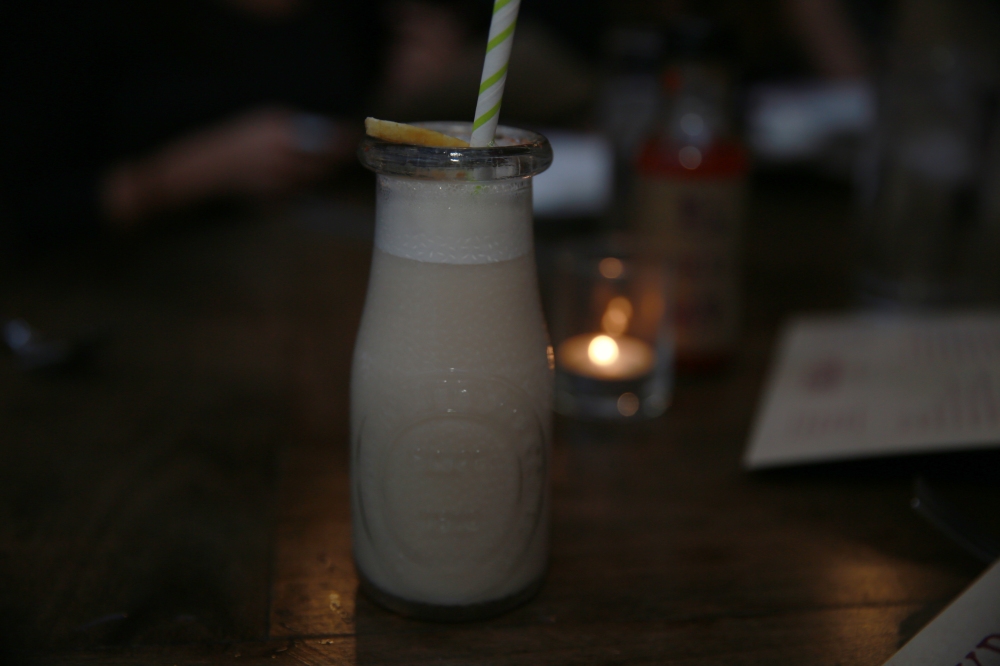 “Milk was a bad choice” Except it wasn’t, it was a great choice, and it could not have been served up any cuter.

Gretchen’s drink, the Pineapple Propeller, was “My perfect drink. I asked for fruity, sweet, and delicious. This was exactly that! I love pineapple anything!” And Cameron adds, “The server recommended the Pineapple Propeller and it wasn’t a mistake. It is what dreams are made of and it’s probably my new favorite drink. “

Gretchen ordered the Fried chicken skins & honey hot sauce: “These were crispy and delicious, but didn’t have enough honey sauce.” Honey sauce is something everyone should experience; the heat hits you while you’re still tasting the sweet from the honey, intensifying both flavors. Gretch also had the Calabrian pork bites & greens. “I would definitely order this again. Everything had a nice zesty flavor!” 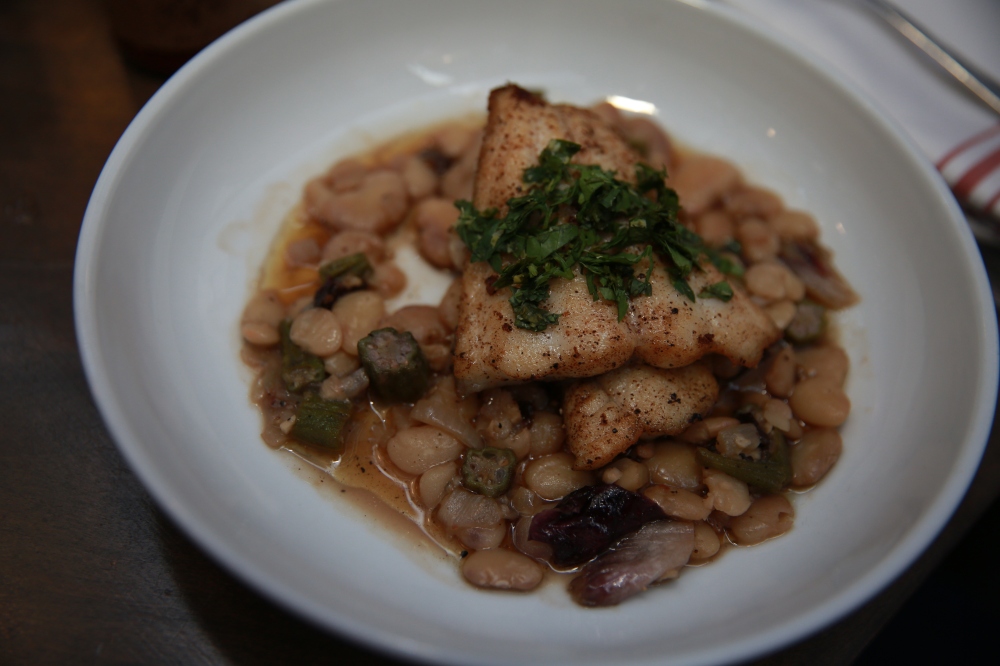 Angela had the catfish al arrosto with okra succotash. “Fish was cooked perfectly and well seasoned. The waiter was very knowledgable about the food and drinks and made great suggestions. I also had the Okra Cup which was homemade pimm’s, strawberry, cucumber, and lemon juice and seltzer. It was sooo goood!” That’s a technical phrase in the industry, you guys.

Cameron explains, “I ate the fried chicken Tennessee style and it was very good. It wasn’t overly spicy and had great flavor. The server was extremely knowledgeable about everything on the menu and where everything came from.” In this post-Chipotle-shuts-down-most-of-their-stores society, it’s nice to have servers who not only know the menu like the back of their hand, but really love it.

Macey had the hush puppies & the Soul Burger, a Wednesday special. “The hush puppies were served with goat cheese and cucumber salad and I really liked the texture combination. The Soul Burger, topped with grilled onions, pickles, cheese and a mustard sauce, was simple and perfect. Just when I thought it couldn’t get any better, our server brought out salted caramel canned biscuit doughnuts for the table. Okra, you can put a little South in my mouth anytime.” 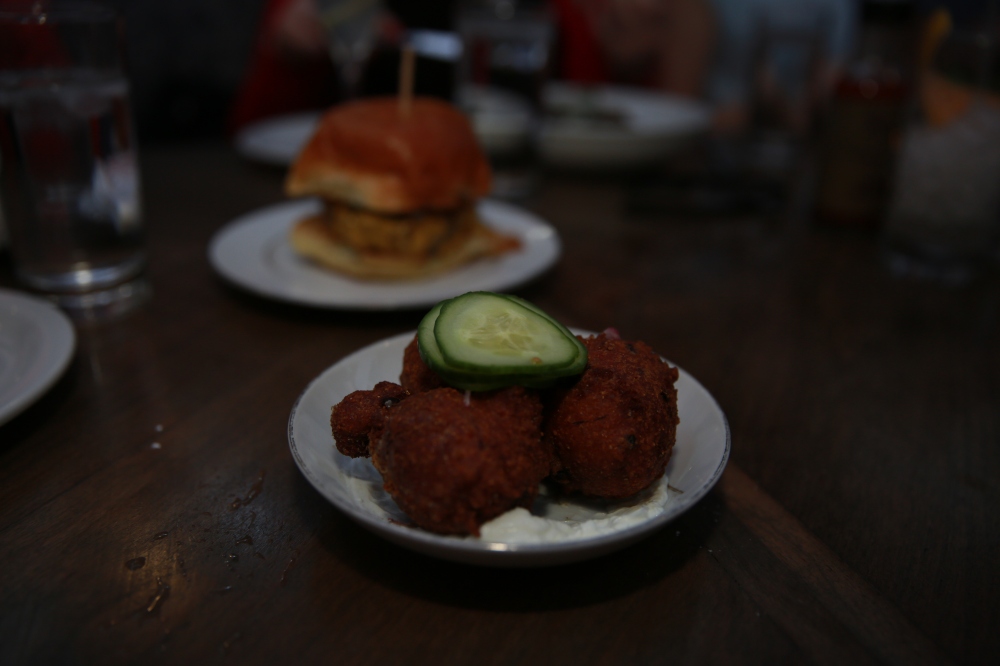 Low light meant a blurry photo of the beef brasato and fingerlings with broccolini fonduta, but don’t let that deter you from ordering the succulent meat dish. “It tastes like my mom’s brisket,” Stephanie said. But that’s a good thing, because Stephanie is Jewish and her mom is a chef. The meat would have fallen off the bone if there was one. While the broccolini fonduta was tasty, it may not have been needed with this dish, the meat is already so heavy that a lighter vegetable, maybe one without cheese, would have been welcomed. Or just the potatoes and maybe some carrot. But heavy and comforting is what you sign up for at Okra. They don’t half-ass anything. If melted cheese can be had, then melted cheese will be had. But a biscuit, which Stephanie ordered on the side, went well with the dish, too.

Cameron points out, “And let’s not forget about dessert. One of every dessert is always amazing!”

Full disclosure: the meal was served with a lagniappe of dessert. We got to try all the sweets on the menu (some twice, because that canned biscuit donut is unreal).  While all the pies are melt-in-your-mouth ready to go (I’m lookin’ at you, chocolate pecan), that biscuit-donut (feels like the equivalent of naming your child Bonnie-Jo  or Heather-Anne), the only staple on the dessert menu, is something you get to think about when you PMS now. Long gone are the days we crave Nutella. There’s a canned salted caramel biscuit donut from Okra that stole our hearts and ovaries. But look, we’re never gonna turn down some pie, okay? The day we went we had a lemon custard pie that had enough tang and sweetness to taste like a sunny day in a state where the summers aren’t 110º in the shade and a pecan chocolate that was so deceptively rich we were all satisfied after one bite. Pies, definitely share. Biscuit-donut hybrid from God, definitely get your own.

The Full Review {their menu here}:

Favorite Appetizer: Hush Puppies, Goat Cheese and Cucumber Salad, while I’d love to get a few more cucumber in said ‘salad’ the texture of the hush puppies make up for the smallish portion, full of flavor, crisp texture with soft dough center.  A great start to any southern inspired meal.

Favorite Entree: Fried Chicken {Umbrian style} there is the Spicy hot sauce or Italian style. While their hot sauce is always a good choice, the savory herbs in the Umbrian are perfect for fried chicken.

Least Favorite Entree: Rumor has it the burger is amazing, but outward appearance was lackluster. We’re going by looks and not taste here, but as they say on Chopped just about every two seconds when a contestant isn’t talking about the sob story that brought them on the show, you eat with your eyes first.

Favorite Dessert: Canned Biscuit Donut, with salted caramel sauce. Hands down. Do not even try to change our minds.

Favorite Drink: First of all, the drink menu is great. We love it so much that you might have to have a few rounds.  But the specialty drink{s} are mint juleps and they have a variety of types from a rum tropical julep to a traditional. In terms of pairing, the refreshing mint juleps are perfect for the Southern + Italian fusion.

1-10 Service {0 worst, 10 best}: 10.  I don’t think we’ve ever been treated so well! Southern Hospitality is real, y’all.  Upon reservations they were able to work with our large group even though we were a last minute reservation and they already had another large party that evening.  The staff was extremely knowledgeable. Everyone was super friendly and answered all of our dinner questions. Our Server Ty was awesome, quick service, full drinks, and they even let us sample the entire desert menu.  Splitting the checks was also hassle free, I didn’t have to do any math!

Reservations? If you have a large group I would highly suggest reservations.  They have some outdoor seating but they definitely fill up quickly!

Parking: From 7th Street you can see the sign for Okra, but you’ll want to turn onto Palo Verde dr. to park in the back where the entrance to the restaurant is located. There is plenty of parking back there, but the first time I went there it was a little confusing.

Would we eat there again? YES! I’ve actually been there twice and am heading back tonight! It centrally located and delicious, plus when I joined their email list I got a 20% off coupon.

Have you checked out Okra before? Did you like it; why or why not? Any menu suggestions? I’d love to hear more about your experience and, while you’re at it, leave us a comment for where we should try next!