This month’s food club was at Thai Basil.  Originally, we had wanted to go to Thai Rama, but they’re closed on Mondays, so we decided on Thai Basil, it’s one of my favorite places but no one else had really been there.  A few of the bitches hadn’t even had Thai food before! Anyway, here’s a glimpse at our night out…

I was pretty proud of myself for noticing the ring before she even sat down, as you can see it’s beautiful! but anyway, on to the food and drinks… 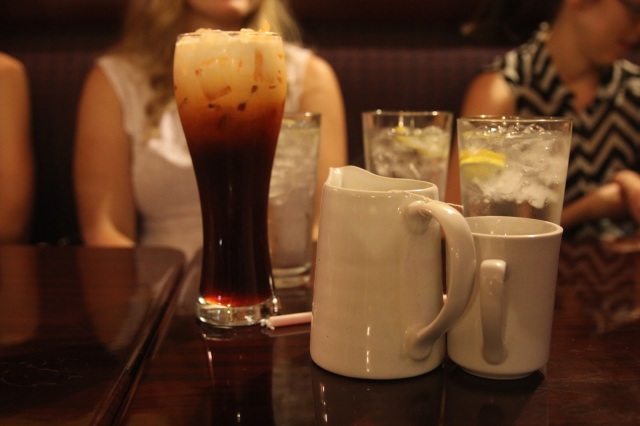 Thai Iced Tea.  So good and a huge portion, I ended up getting a to go cup for later. 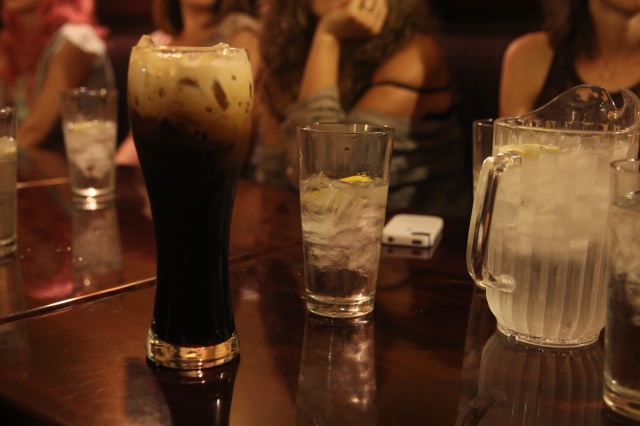 Thai Iced Coffee also amazing, also huge glass {I often order this at dinner then get it to go and have it for the next morning, but I think Emily might have finished it that night!}

missed which dish this was but yum rice.

According to Macey, “Potstickers were awesome, perfectly cooked and came with a yummy sweet & spicy sauce. Spicy fried rice with chicken was good, I ordered it “Thai hot” and it definitely made my nose run. I liked that we could all pay individually. But it did feel rushed that they brought everything out at the same time and it would have been nice if they had beer or wine or even BYOB. If I got food from there again I would get take out.”

Meghan says, “I ordered the combo plate of appetizers and chicken ‘pad-see-ew’: The combo plate wasn’t anything to write home about, except for that the sauces were really, really good. The pad-see-ew was delicious – everything tasted very fresh and kept its own flavor – and Stephanie Sparer was right about the thick noodles being awesome. I was bummed that the appetizers were served with the food, though, and (needless to say?) that they don’t serve alcohol.” 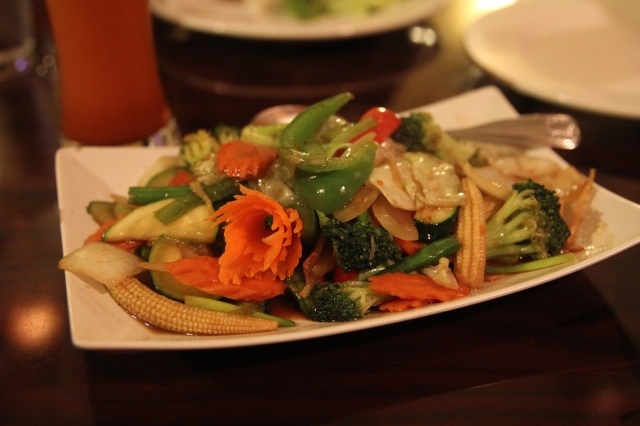 You know when you order regular fries, but there is a surprise curly fry and you’re like WIN! Well that, except you ordered veggies and bonus chicken, unless you’re vegetarian and then you’re like, FAIL! Delmara ordered the veggies and says, “It was a bit light in the ginger flavor and it had a bonus chicken.” 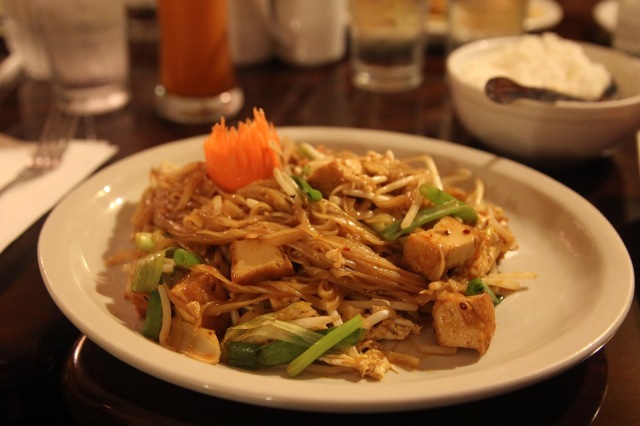 My pad thai with tofu was medium spicy but actually pretty spicy, It was delicious…

…and I shared half and half with Anna and the Rama Favorite with Tofu is always my favorite dish.  Love peanut sauce.

“I got Pad broccoli with beef. It could’ve been a bit more flavorful or spicy, but it tasted pretty yummy the next day actually. They either never took my drink order or I was distracted and missed it? Not sure.” explains Gretchen.
The Full Review {their menu here}:
Favorite Appetizer: Spring Rolls, love the little side salad and dressing that it comes with too.
Favorite Entree: I love Rama’s Favorite {peanut sauce} with tofu and their pad thai is great.
Favorite Drink: I love thai iced tea! but I wish there had been alcohol as well.
1-10 Service {0 worst, 10 best}: 7, We knew what we were getting into by choosing somewhere that closed at 8:30 but if we had ordered right away {again not their fault, a few people weren’t ready to order when we got there} we might have had time for desert.  Everything came out at one instead of staggering appetizers, which again might have been because some people ordered appetizers as their meal.  However, we all finished eating and DID want desert but they never came back to check on us once we finished eating.  I think they were a little overwhelmed with a large group since it’s more of a lunch place.
Cost {$  $$  $$$  $$$$!}: $ Great prices I got a non-alcoholic drink {because they don’t have alcohol} and entree for under $20 or just about with tax and tip. As far as split checks go it was the most convenient place we’ve ever been! “I must say, the register was very handy for bill splitting. They dealt with us well. Needed booze” as Delmara puts it.
Mistakes {corrections?}: no mistakes, just rushed {but friendly} service.
Reservations? Not sure if they would normally be necessary but they did take our reservation for 12.
Would we eat there again? I would! I like thai food, and they have the best vegetarian selection from the places I’ve been to in the Phoenix area.